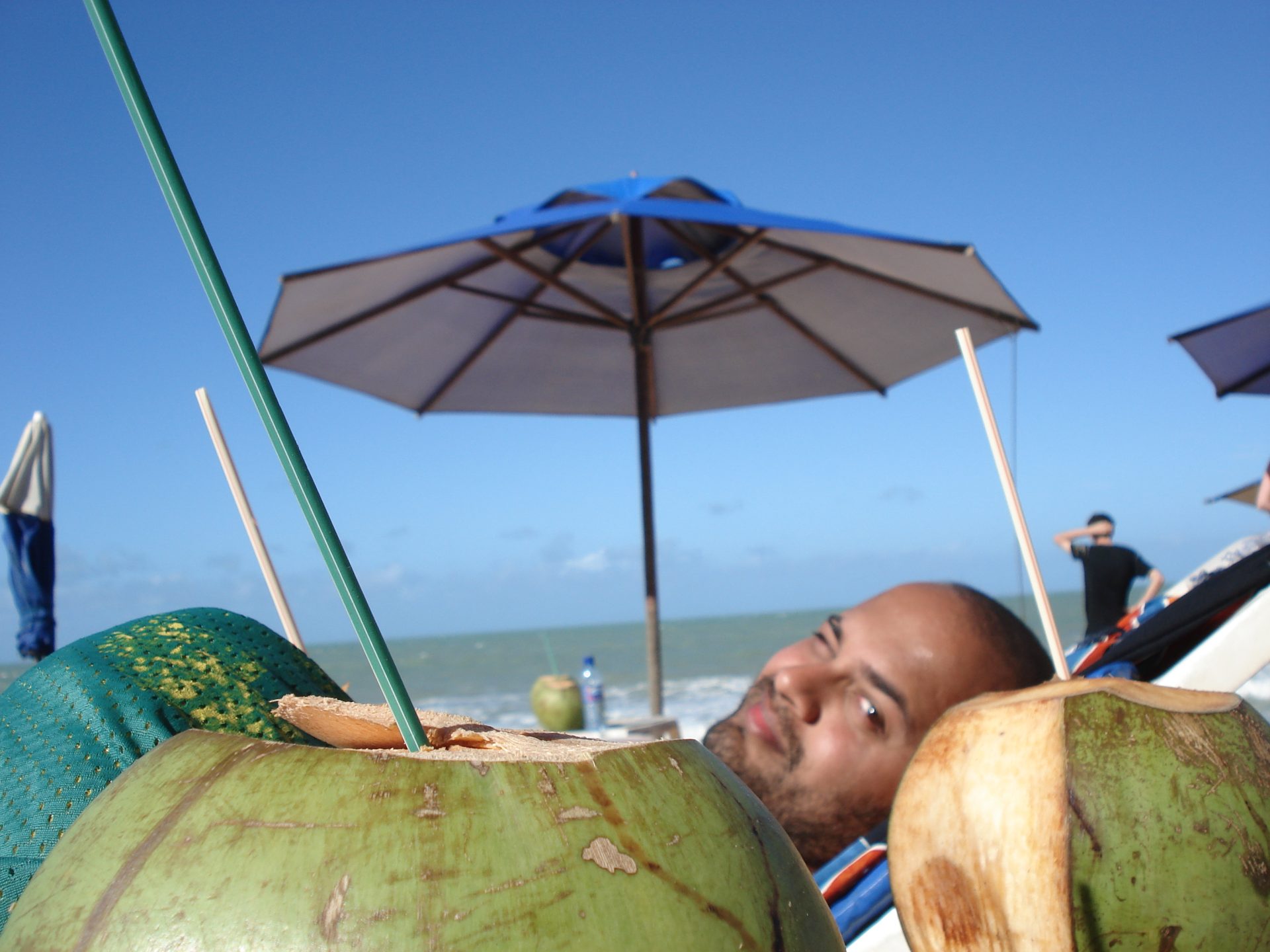 Flew out early yesterday morning, although the plane just rested on the tarmac lazily for over an hour past departure time. We were already quite sleepy and tired, so we were happy getting three seats each to lie down and nap. Finally landed in Natal and were immediately struck by the pleasant weather – not too hot or humid; just right with a breeze. Had quite the adventure finding our flat with our fairly senile taxi driver, who insisted on not getting directions or instructions… until he had to. By hook and crook, we found our flat. Very nice accommodations, with fridge, coffeemaker, stove, and even a balcony. Most of all, it was super clean and comes with a host of rules and regulations to observe… which we thought was good, actually. The pool in our complex is small, but nice. We didn’t really feel like resting, even though we were hella exhausted. So we wanted to check out the nearby mall, internet options, and again, get a new chip for our phone. The mall, we found, was quite modern – lots of tourists and beachcomber-types wandering about and filled with designer boutiques.

The good thing was it has free wireless internet, since our flat has no internet at all. We wanted to shop for the entire week, since we had an apartment with all the fixings, so we inquired and found out there was a Wal-Mart type supermarket not far away open 24 hours, called “Extra”. We took an over-crowded bus, and swore we’d walk or take a taxi from then on! After spending a couple of hours in the store, and satisfied with our purchases, we took a cab back to the flat. The highlights of the purchases: Frozen juice pulp (we got about 5 different flavours, to make fresh juice in the mornings), frozen spinach for $6, and ricotta cheese which was hard to find, and snacks called “Fandangos” (corn chips). This morning we decided to sleep in and rest. Early afternoon we made ourselves a coffee and were quite happy that the coffee maker worked. Also, we were happy that we didn’t have to buy 100 ml of coffee with milk for $3 outside!

We packed up our lunch and fresh juice from the fruit pulp and walked over to the beach. It was beautiful. Karthik went into the water, while Penny decided to skip it for the day – especially since the sun was going down already and it was getting a little chilly. We got there too late. We will head out there earlier tomorrow (around 10) so that we have enough time with the sun. Right now we’re sitting at the mall, with our laptop, making use of the free wireless. We’re sharing a table with a nice gentleman, who’s telling us about the city, and about the “sex tourism” here, which is big in December and January. Apparently women come from all states during that time, as business is big because of all the European men that come here for this. Disgusting!! We’re all shaking our heads. By the way..this last part is ‘real time news’… good journalism!! Bravo!

Haven’t written for a while… we’ve been quite busy… doing nothing!! That’s right, for the past few days, we’ve been in Natal (Ponta Negra actually – a suburb of Natal), and done nothing but relax. It has been raining quite a bit, and on the days it hasn’t been, we’ve been catching some waves and some sun at the beautiful beach not too far away from the apartment. The salty water’s been good for our skin…and well who can complain about getting some colour! Karthik’s been experiencing some burn – looking like a tomato and all, but Penny’s mostly getting the brown colour she’s been waiting for so long to get! The beach is full of ‘beach vendors’ trying to sell ‘this and thats’…but the most amazing was an artist selling his paintings. His act: He pulls out a small, stretched canvas, throws dabs of colour on it, and starts mixing them on the canvas with his fingers. 20 minutes later…and a beautiful beach scene appears! It was awesome…but since we promised ourselves that we wouldn’t buy too much from the places we visit, we restrained and only admired his art with high praises. Overall, a relaxing and enjoyable beach time, and got to enjoy some cold fresh coconut water right when the heat was getting too much. Then there’s the matter of work…which we must keep up with, and so have been doing some of that as well.

Most evenings when we were at the mall for our free internet connection, we sat in the same area, and ordered our beers from the same waiter (this chap just makes you want to smile as he himself is always smiling, and one can see he is enjoying his life). Always a good feeling. Also, every night at the mall there has been some sort of live entertainment – so that itself was fun! Who would have thunk that we’d become mall-rats at this age?!! We were planning on taking a “dune buggy” tour – but the weather didn’t allow it. Also, we didn’t actually check out the Natal downtown…but we’re okay with it. In fact, it was the weather (i.e, the rain) and our comfy home environment that got us talking about our experience so far and the trip in general. Having been an ‘idea’ for so long while in Toronto and as we were constantly ‘doing’ something or another to make this happen (and it is happening!), we can now reflect on it together and see it truly for what it is. We got to thinking who in their right minds would leave the comforts of home (stability, family, resources, friends, etc.) and set out on this insane expedition! We realized something insane can only be fruits of insane minds and in accepting our insanity, we came to be more at peace with it all. It’s OK that we don’t have all the comforts of home and it’s OK if we have to re-learn things in every new environment; it’s all part of the experience.

This little break was nice. We head off South tomorrow to a small town called Joao Pessoa – a vacation spot for Brazilians and a quaint pretty beach town. We’re treating ourselves to accommodations in a nice hotel right by the beach…let’s see how that pans out.