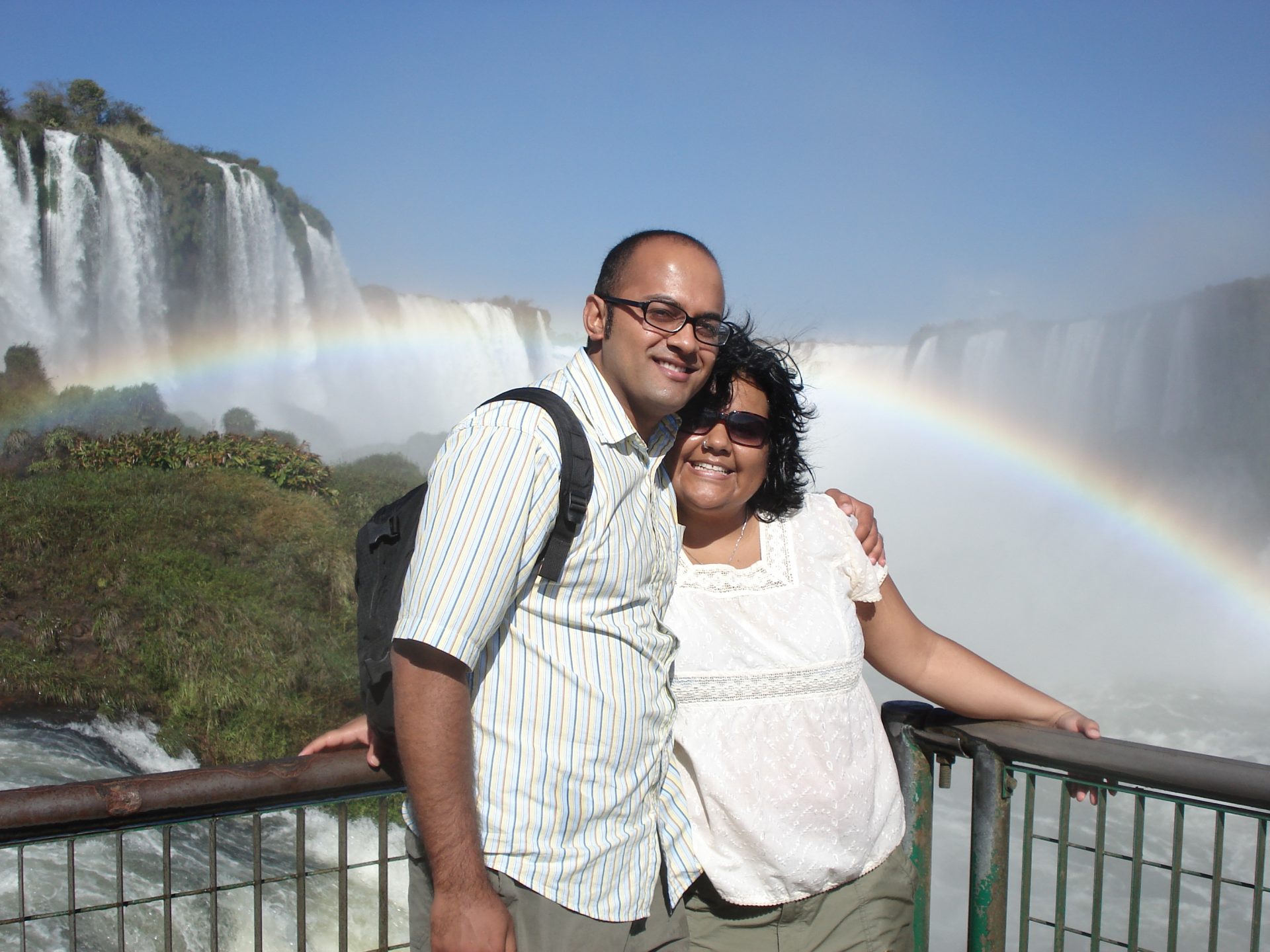 We got to Iguassu Falls last night. This city is at the border of Brazil, Argentina and Paraguay. The hotel is beautiful, and right next to the local bus station (which was convenient as we took a bus from the airport). The courtyard of the hotel is creatively decorated with bamboo, wooden logs, straw, cacti, plants, swings, pool, and cool lanterns. We had a really enjoyable dinner at a local supermarket (actually more like a Supercentre in Toronto), that had a `self-serve` facility where you pick what you want and pay for it measured by its weight. Today, we took a bus to the Iguassu National Park. This is an area shared by Brazil and Argentina. The Iguassu Falls are also shared by the two countries, just like the Niagara Falls are. We took a park bus into the forest, from where we were to walk about a kilometre to the mouth of the falls called the Devil`s Throat. The walk was on a paved path through the jungle. There were plenty of other nature trails through the jungle, several kilometres in length which we skipped for obvious reasons! Also, the boat rides and helicopter tours, which enticing as they were, were too expensive. At the stop the bus dropped us and before we started on the path, we noticed some wildlife! These strange raccoon-looking creatures that were `nosing` about and mingling with the tourists. We later found out that this was a fairly common animal here (Capian) and the souvenir shops even sold stuffed versions of them. We`ll mention why we didn’t buy any, later on! The falls themselves are a natural formation covering almost 3 kilometres of cascades created by the Iguassu and Parana rivers. So along the walk we got to see various waterfalls that increased in beauty, with rainbows becoming brighter and more noticeable as we got closer to the Devil’s Throat (main falls). Along the path, there were butterflies of several varieties flitting about and stopping here and there, which allowed for some cool macro shots. The path continued its way till another smaller bridge branched off to go right up to the main falls. This was an immensely spectacular sight, with cascades surrounding us all around and mist just filling the air everywhere.

We walked on the bridge, starting to get wet from the powerful mist being emitted from the falls. There was one rainbow, then two, then three… it was unbelievable actually! We were completely moved by the sound, the sight, and just the feeling of being there. We stayed on longer than most of the tourists that started on the path with us, not being satisfied with taking it all in. 360 degrees around us were beautiful falls of various heights and intensity, forming rainbows that were almost complete circles! It was impossible to capture it all on the camera or even express it completely with words. We really felt Nature’s might and beauty being there – we even talked about how moved we were even though aliens had no part to play in its creation! It was good old Mother Nature! Getting a bit cold due to the strong winds and dampness, we walked back on the bridge… as hard as it was to leave. We took an elevator up to a viewing platform which was on the same level as the river, so you could see the Falls… well, falling. This was less impressive, since we weren`t right up there as we had been, so we spent some time and Karthik took more macro shots of butterflies. We walked over to the visitor centre to get some lunch and look around. Here, these raccoon-beasts were absolutely everywhere! It was a complete infestation! When we had once seen them as a cool animal initially, they were starting to behave more and more like the raccoons back home. At the eating area, there was a guy who had to continue shooing them away from the benches. It seemed like his full-time job! Penny actually saw one of the damn things get up on the bench and dipped its snout into one of the visitor`s trays causing a major ruckus and ending the poor guy’s meal short. The funniest (and ironic) thing was there were signs everywhere “Do not feed the animals”! We grabbed some food, or at least tried to, since there were so many bees and flies flitting about near the water. So we ate quickly in the eating area instead, and wanted to get outta there! At the bus stop, more raccoons were ‘attacking’ a parked van with its driver’s door open as the driver was taking a nap (they thought the rubber on the tires would make a good snack). On the way back, we thought how we should’ve left right after seeing the falls… as we were feeling so positive and happy then… without worrying about raccoons, bees, and flies!

We got back to our local bus depot, enjoyed some coffee, and headed back to our hotel to chill the rest of the night. Tomorrow, we head off to Bolivia via Corumba… two days of busses! Not looking forward to the long bus ride at all!