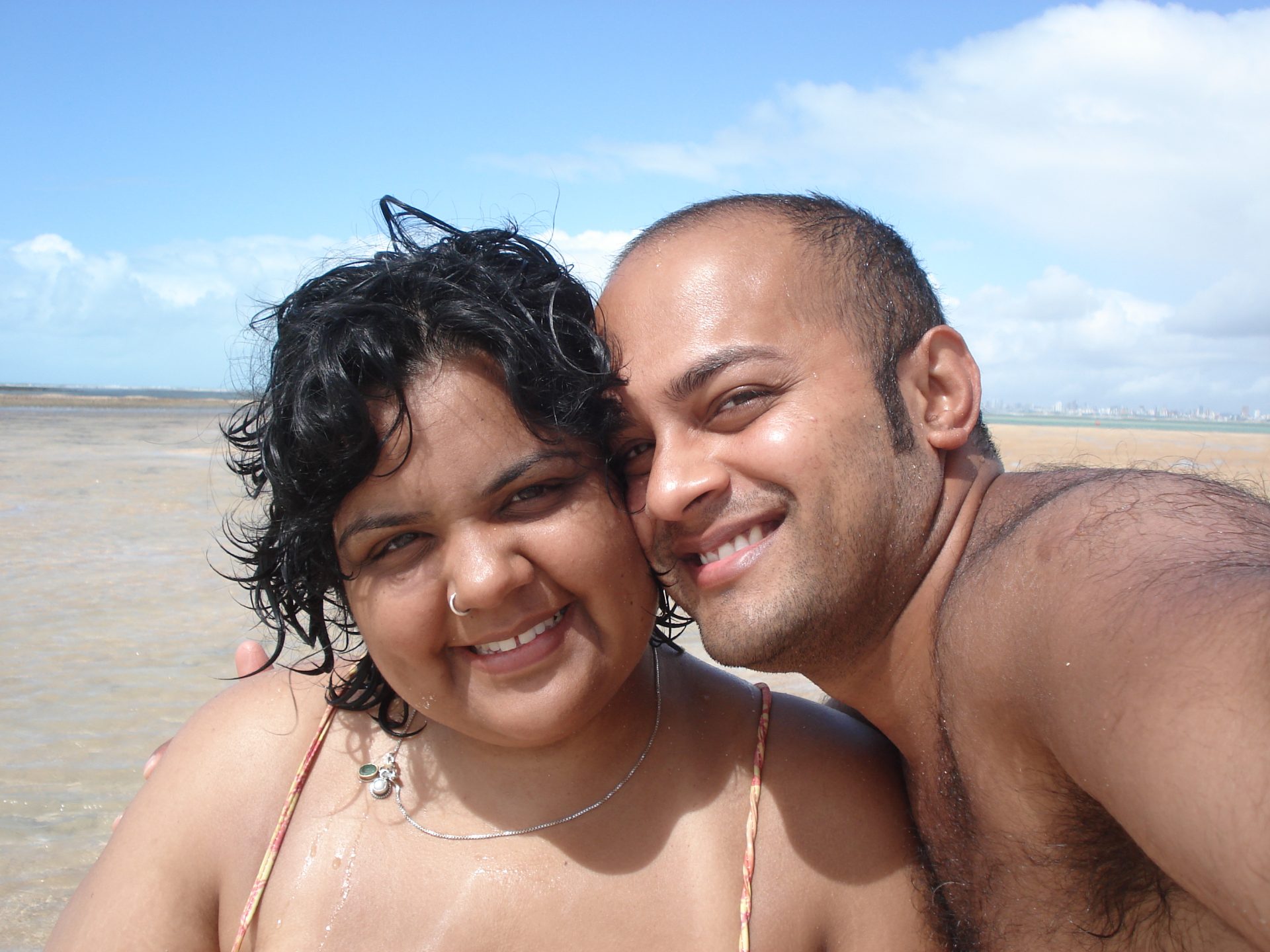 Took a bus from Natal, and it was a wonderful experience mainly because the bus was mostly empty and the chairs reclined back completely. We got to take a wicked nap! Got to the hotel around 7:30 pm and our first impression – awesome!! As we mentioned earlier, we decided to stay here, Tropical Tambau, in order to treat ourselves. It’s right by the beach, and considered one of the top hotels in the city. The hotel has two floors, and the rooms are only on the top floor. We opted for the ocean view. So as the porter dropped our luggage to the room, we decided to check out the balcony to see the view (even though it was dark). And yes…there was the ocean, and since it was a little windy…there were the waves! It was truly awesome. We decided to go for a walk around the hotel and take in the view from the balcony during the day. Right across the street is a newly built square. It comprises of little food shops, with a large patio area. People were hanging out having their snack foods, juices, beers, and kids just playing around. We decided to check out what was being offered, and a waitress started to ask us to pick something from her menu. Not understanding a single word she said, we managed to ask (gesturing a thumbs up) which is the best dish on the menu. She pointed something out, and we decided to order it. These were crepes made of tapioca flour and stuffed with cheese or chicken or beef or a mix of all! Kinda dry… we couldn’t really enjoy it too much. Then she brought over the menu again, and pointed to another dish for us to try. We told her to go for it. This rice, bean and cheese dish, topped with chicken curry, was much better. She hung around our table for quite some time (most of the time we were there actually), and we managed to converse with our broken Portuguese and mostly hand gestures. She told us that she works there full time, and enjoys talking to tourists and listening to their stories which allow her to imagine herself travelling the world. Interesting time there…but now we were getting tired and wanted to head on back to get some good sleep.

A new day, and it’s not raining! We woke up early and headed off to get some breakfast (included in the room charge). Quite impressive – a huge buffet! Reminded us of the Golden Griddle buffets that are oh so enjoyable on Sunday mornings! All sorts of fruits, cakes, the other usuals, and cereal!!! We filled up, and decided to go to the beach for some chill time and to continue working on our tans. As it is their winter, the winds are quite strong, and so the ocean water has a lot of sand mixed with it near the beach. Also, the waves were bringing in sea weeds to the shore. Not really the best water to go for a dip in, but the sun, the sand, and the sound of the ocean waves was enough to keep us there for a few hours. We then headed back to the hotel, enjoying some cold coconut water (only R$1 each) and went into the pool for a quick dip. Since the internet connection was quite expensive (R$5 for 1/2 hour), we decided to stay off of it for our duration here. Instead we went to explore the other food options near our hotel. A grand buffet – only R$13 per person, Bob’s burgers (like McDonald’s, but they didn’t have any veg options and their chicken had run out), and other bar/local restaurants. We were checking out the menu of one when the owner who spoke a little English came out and pointed out their speciality. A sizzler dish, with rice, beans, salsa type mix, tapioca flour, and cassava. He assured us that everything is cleaned and cooked thoroughly. We stayed. The food was good. Their hot sauce was extremely hot. The portions were too big for us to finish. All full, we strolled back to the hotel.

This morning we booked a tour to Areia Vermelha which is a sandy island out in the middle of the ocean (where the tide is low). We met our tour guide, and came to know that she doesn’t speak a word of English! Great!! During our bus ride there, she went on talking about who knows what, and people were laughing and gasping, and reacting the way tourists react when they are presented with interesting information about the place they are visiting. Meanwhile, we stared out the window and made up our own stories, and were impressed by seeing the McDonald’s and Pizza Hut! We finally reached the shore from where we were to hop on a boat that would take us to Areia Vermelha. There were clouds in the sky, but they were moving quickly enough to give us hope of some sunshine. We reached the island… and man was it a sight! Shallow waters, all sand island, just a few people, a bar and tables laid out to one corner, and then…the sun! We walked along the tiny, sandy island, and found ourselves a perfect spot. The water was a half foot deep, the sand smooth, soft ripples of water, and nothing but water and sky around us. In the distance we could see the Joao Pessoa skyline, and a beach on the other side. But we were in the ocean…unbelievable. We laid in the water, gave each other sand rubs, and soaked in the sun. It was just perfect!!! We had to leave after three hours as that’s when the tour ended, but we really wanted to stay longer.

Back to the hotel, and to the pool. We ordered pizza and beer and just relaxed in the afternoon again. A couple came over and the man asked “Where are you from? I heard you speak in English.” They were siblings, Flavio and Marcia. Flavio lives in N. Carolina and his sister in Salvador de Bahia. It was great to meet English speaking people (actually only Flavio spoke English). We talked for a while, and they told us they had been there for a week, just spending time with each other. They invited us to join them in the evening at Jacare Beach for a sunset concert. We agreed! We split the cab and got to a packed bar of many along the riverside, about 20 minutes away.

After ordering our beers, we found out that their usual Saxophone player was not in that evening. Flavio, who plays the Sax as a hobby, and carries it with him everywhere he goes, decided that he would step in and play some. But the sax was still at the hotel. He paid the cab driver a few bucks to drive back to the hotel, get the hotel staff to retrieve the sax from his room, and bring it back to the bar. And he did!! In the meantime, the sun started to set, and the violinist started her performance. Initially we thought “ah..this is just okay..we’re not that impressed..what is the big hype about anyway?” But then…the sky started to change colour. And well, we were left speechless! The sky was just incredible. The hues of reds and purples and oranges and blues… the streaks of colours all over the sky… the sweet breeze on a warm evening by the water… the sound of the beautiful violin…all just perfect! We took pictures, and then some videos, but after having watched them, they don’t do the evening justice. Still, they will be a reminder for what we felt when we were there! The cab driver was back by now, and the owner of the bar arranged to have Flavio squeeze in his performance between a set. It was beautiful! We hung around for a while after, chatted with the bar owner for a bit, and headed on back to the hotel. It was a wonderful day. All of it.

We check out today at noon. So our plan is this:

We get to the reception area to meet our tour group, and find out we have the same tour guide as yesterday..the one who doesn’t speak a word of English. C’MON! We can’t do a tour of the city without understanding anything the guide is telling us. Besides, she didn’t even make an attempt to communicate with us, neither did she make any eye contact! To top it all off, they didn’t have any information about the sights we were going to see in English! Pissed off and disappointed, we got on the bus. As luck would have it, we were the last on the bus, and the only two spots left were in the way back (the row of five seats). But here the part that was affected by our luck… the lady sitting beside us was British, and spoke Portuguese! She was visiting her daughter, who works for a hotel there, and so has done this tour a few times before. She volunteered to translate everything the tour guide was saying, and shared some of her own information as well! Yes, we felt lucky!

This is what we did and found out:

We walked back to the hotel to get started on our work. Hung out there and by fluke got connected to the internet. So we sent out some emails, and called the parents on skype! The taxi driver came right on time, and we started our adventurous, thrilling, and theme park ride to Recife. Seriously, we had read about people in Brazil driving like race car drivers. Experiencing it was stressful! With the clear roads in the middle of the night, this cabbie decided to totally gun for it! 120 – 130 km/hr is not bad…we do it in Toronto (or North America) all the time. But you have to consider the road conditions. These roads are not meant for such speeds! It felt like we were going at least 160-170 km/hr. The sharp turns, the narrow two lane highway, the high beams from oncoming traffic, and finally the speed bumps that he didn’t slow down for! Yeah, we were glad to have reached the airport in Recife safely, even though our body cried as every muscle had been in a super tense state for the past 1.5 hrs. The airport in Recife – beautiful! It’s 6 years old, and reminded Penny of the national airport in Sydney (from which she flew out to Adelaide). Funky architecture, cool waiting chairs, and clean. We tried some coffee made with condensed milk – thinking it would be the same we are used to having at the Red Room (Vietnamese coffee). But this one was full of sugar! We had a good laugh at the difference in sizes between the small and large, where small was like a shot glass (R$3.50), and the large was at least 500 ml(R$4.50). It wasn’t hard killing the 2.5 hours there, especially since we got into our first fight on the trip. We were both tired and cranky, and well, we needed something to do! All was well when we saw these leather recliners at the waiting lounge by the boarding gate. We sat in these comfy chairs until the last possible minute. We watched the fellow passengers “run” to the gate as clock was ticking and thought to ourselves “ah just a couple more minutes, then we’ll go!”; We scored three seats each again! Unfortunately the flight was only 1 hour long! Good napping, on our way to Salvador de Bahia!