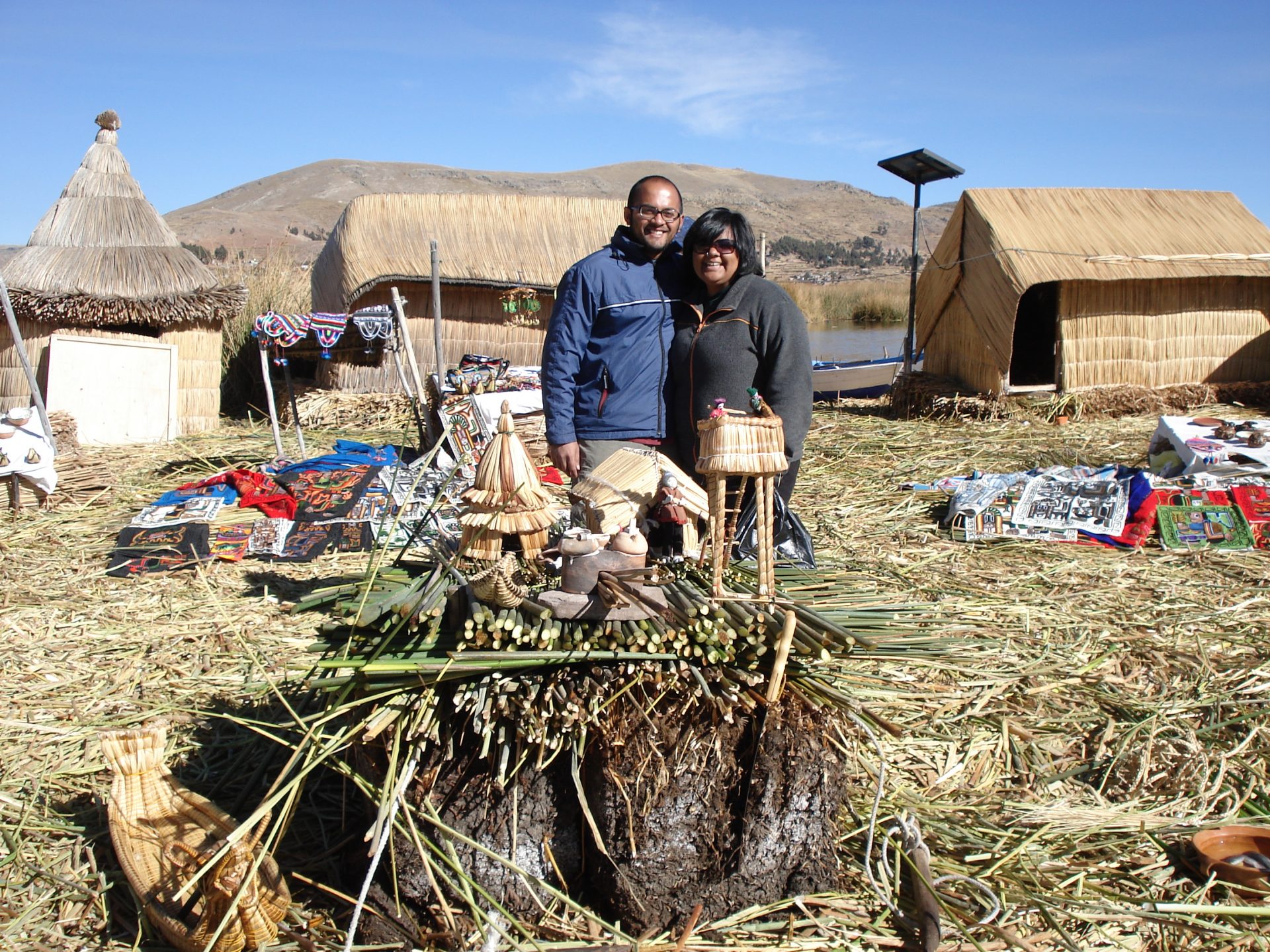 We headed off for Puno, a town by Lake Titicaca in Peru. The bus ride was comfortable enough and uneventful, except for glimpses of this massive lake here and there and multiple security stops by the Bolivian military. As we approached the Bolivia-Peru border, we were told to go get the ‘exit stamp’ from Bolivian immigration and then walk over to Peru and get our entrance stamps. We met some more tourists as we waited for our bus to ‘join us’ in Peru – a newly married couple from Ireland and a young Australian guy doing the ‘work and travel’ around the world thing. We shared some interesting experiences, but nothing to keep in touch about.

We finally arrived in Puno, and were greeted by the usual locals offering tours and hotels. We started talking to one of them, Fernando, and decided he was trustworthy enough to book a couple of tours with him. One of them was to leave in an hour! Apparently, it would go to some Incan ruins where they buried their dead and he highly recommended it. We quickly dropped off our stuff at the hotel, which was quite nice and clean, and our tour bus came to pick us up and several others before heading off. Having been quite ‘warm’ in the bus and it being afternoon, we thought “Enh… why bother with jackets!?” We made a quick stop at a lookout point overlooking Puno, which gave us a good view of the lake and the city built all over the surrounding hills, making us think of it as a ‘mini La Paz.’ At this point, it was getting quite windy and chilly and we immediately came to regret our decision of abandoning our warm clothes. Everyone else doing the tour was dressed up as if for the middle of a Canadian winter!

We passed by some interesting scenery, mostly filled with pastures and various animals grazing, however we noticed for the first time Alpacas! They’re “Llama-type” beasts that are sort of like tall sheep, furry and all that. When we got to the ruins of Sillustani, which was beside a smaller lake, it was quite windy! We thought we’d be able to buck up and so we walked along with the group and listening to the guide explaining how this site contained various stages of burial mounds/towers in Incan ceremonial burials. Wasn’t too interesting, and we were mostly trying to stay warm! The scenery itself was really something, so it somewhat kept our spirits up. At some point, we couldn’t handle it and we didn’t want to get sick, so we asked for the quickest way back to the area where the buses were parked.

We rushed off to the cafe there and ordered some hot tea and thanked the stars for desperately needed warmth! We headed back to Puno, and having this annoying feeling like we’re coming down with something, we decided to take it easy. But we still had to eat! So we asked for a restaurant that would serve the “Quinua soup” we enjoyed much in Bolivia. We got a table by the traditional wood oven, which was a nice and warm location. We ordered the soup and also some interesting dishes that were native to Peru. We quickly dug into the soup, which was warm and quite filling (lot more lentils and ‘stuff’ than in Bolivia) and were already regretting having ordered the other dishes. There was an accompanying appetizer that consisted of mashed potatoes, chicken, and a lime-ish topping and vegetables, which was delicious and its presentation was very impressive. We loved it, but didn’t finish it, deciding to leave some room for the main course.

The main course was a full chicken breast (divided into two fillets), cooked to perfection and topped with a local herb sauce and salad, and resting on a bed of potatoes and sweet potatoes. Again, the presentation was brilliant. It was simply perfection! Our initial bite (inspite of being full) had us complete the whole dish within no time! We had to write back about this one, and so Penny did! Especially to Nik and Mom who had to make it back home. Being completely full, and cold and tired, we headed off to our hotel to sleep – we had to wake up for a 6:45am start on our trip on Lake Titicaca! While preparing to go to sleep, Karthik, the brilliant geek that he is, found a way to enter all sorts of commands and prompts (on DOS) to actually back up the data we thought we had lost on the main laptop. The impossible was made possible, and it was actually happening! Oh what a joyous time that was!! Sure this meant that we could not access everything now, and that it would take a couple of days for the laptop to be up and running, but at least our files were now safe! Phew! And so we had a good night’s rest.

It was too early to be going on a tour and Puno was much chillier than La Paz, so we bundled up in layers and tried to ignore the ‘dry cold’ as much as possible. Having gotten to the port, we were all packed in on the boat. At this point, the driver did a bit of mechanical repair (somewhat unsettling) and then we had to wait half an hour bobbing on the water before we headed off. In this time, we got to talking to a Belgian man who humorously played off the long wait. There was quite an diverse group of tourists on the boat – all of whom were happy as we headed off.

We first stopped by the ‘floating islands’ of Uros – communities of people who lived entirely on small man-made islands made of the reeds that grew everywhere near the shores of Lake Titicaca. It was quite a sight, pulling into the ‘dock’ of one of the islands. We actually had to be invited by the president of the island, before having directed to which island to proceed to. We stepped on to the island, which felt very soft and springy under-foot. Everything in sight was made of reeds! Huts, communication towers, boats… We were given a short tutorial on how they build the islands, which was fascinating in itself – there was a group of villagers cooking a meal while others were collecting and manipulating the reeds for various reasons. We even learnt that these islands could join other islands, and portions of the island could be ‘cut off’ if there were disputes!

We then got to mingle with the residents of the island , with Karthik playing with one of the little children who was not shy at all of tourists!

We then all boarded a reed boat (with a deck, no less!) and headed off to one of the other floating islands, which apparently had been around for so long that it was permanently anchored to the lakebed and couldn’t be moved. We then left the villagers, having experienced something quite unique! We left for the island of Taquile, an island out in the open lake (since Puno was in a sort of bay) – a boat ride of two and a half hours! Bored, we started talking to some of the tourists in the group – a Japanese girl, a trio of British girls, and our Belgian friend – who, we came to learn, was one of the most avid travellers we had met ever! Lukas apparently goes to 4-5 new countries every year and was now up to country # 76! He was one of the most fascinating people we’d met on our journeys so far, and we really came to see how ‘seasoned’ a traveller he really was.

The boat ride had some awesome scenery, surrounded by mountains, hills and small islands – with a crystal clear, blue lake all around. This lake, being the highest navigable lake in the world (at 3800m above sea level) was littered by many tourist boats such as ours – some approaching quite close! We also had a bit of excitement as we were stopped by the Coast Guard for a spot-check (if we were wearing life jackets or not) – and while we were ‘docking’ to their boat, another one was ‘escaping’ the hails of the Coast Guard and so a high-speed pursuit ensued! Eventually, that boat was stopped and we continued on our way. Having arrived at the island, we had quite a bit of a walk uphill! The locals are apparently expert textile makers, with the men mostly doing the knitting and the women doing all the heavy labour!

Our walk up the steps proved to be more than we could cope with! A full half an hour later, we were near the top of the island where there was a large table under a canopy. We were to have our lunch, but not before being entertained by the locals doing a bit of traditional dancing. Our lunch was, again, the Quinua soup (yet another variation) but the highlight was talking to some of the tourists. One of them, a Brazilian guy, seemed quite open-minded and forthcoming in talking about meditation, travelling, and being in the present. There was another couple living in Japan, the man being originally from Seattle and the lady being from Osaka. After lunch, the bulk of the group was to climb up some more steps to check out the market where the local islanders sold their textiles. We decided to skip it and enjoy the fantastic view of the lake and far-off mountains instead, so we walked slowly down to the dock.

On the way back, we engaged in more conversations, talking about our trip and hearing how others are travelling, their reasons, their experiences, and so on. We talked to a student couple from Florida doing their South American journey for a while, and also engaged in further conversation with our Belgian friend, Lukas. He, too apparently keeps a diary/journal of all his travels – which by now is several books lining his bookshelf back home! We definitely had to keep in touch with him and perhaps even meet up with him in Cusco, where he was headed off to next.

We got back to our hotel and feeling too tired to even eat, just dozed off so we could wake up early the next morning yet another time.  Tomorrow, we head off to Cusco!