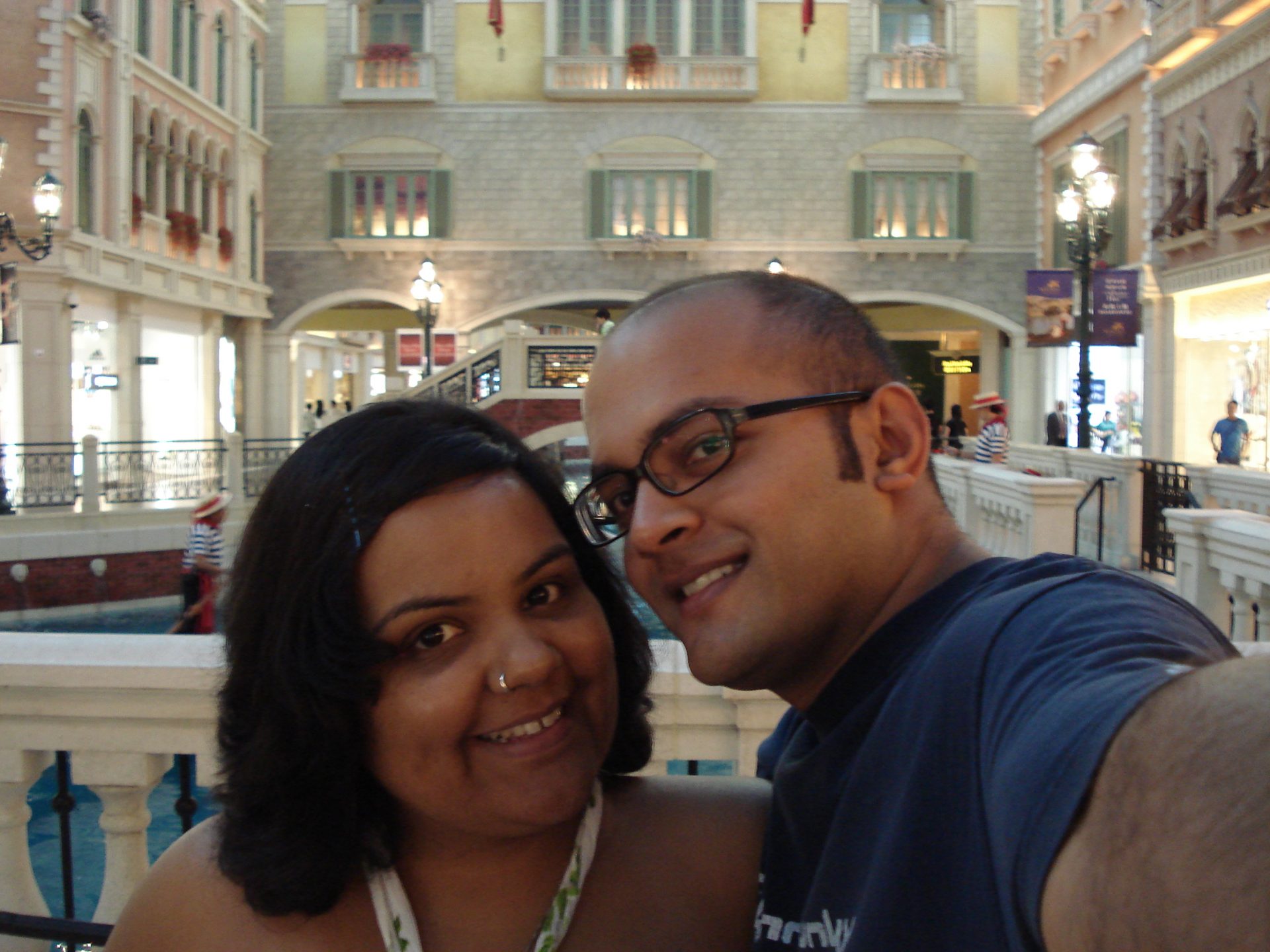 Oct 29th, 2008 Yesterday was a long day! Arrived at HK airport early enough after a uneventful flight from Beijing and then mistakenly passed through immigration. We could’ve bought direct ferry tickets from the airport to Macau and had our luggage waiting for us at the baggage carousel tagged and forwarded with us. Sigh! So now we had to take the bus back to Hong Kong island, then take the ferry from the Macau Ferry Terminal there – all the while lugging our stuff ourselves. Finally got tix for the TurboJET ferry, a big red enclosed boat that supposedly zips super-fast to Macau. The ferry was packed and had the atmosphere of a plane – big comfy seats and a menu you could order stuff from. Were it not for the droplets of water soaking the windows, you wouldn’t know any better.

After an hour and a fairly turbulent (not Turbo-lent) ride, we were in Macau. Immediately, we saw we were in a different place – all the signs were in Portugese and Chinese! After Immigration, we went around looking for the shuttle to our hotel – Rio Hotel. After being directed to a waiting area where our bus would supposedly come, we soon became impatient, annoyed, and tired watching all the buses for all the hotels except ours – the Wynn, Venetian, and others. When our nerves were about to crack, the bus arrived. We checked in and found our rooms to be comfy enough. However, the Internet was not free (again)! After fighting with the management for a while, we eventually found it to be futile. We were hella tired and now had to figure out again what to eat.

We saw that Macau has KFC, Pizza Hut and McDonald’s, however Pizza Hut would be too expensive and McDonald’s had been done to death in Beijing. So KFC it was! Karthik, in the meantime, went for an explorative stroll around to find a convenience store. After a whole hour, he returned having found the local 7/11 and also a nearby supermarket. As well, he’d located the nearby China Travel Service (which was closed) so we’d get some info on the best way to get a VISA to Vietnam (which we needed and time was running short). Productive stroll! The KFC came and we enjoyed a hearty meal of wings, mashed potatoes, crosscut fries, and mushroom rice. Yay!

Today we just relaxed and avoided the main activity here – gambling, preferring to stay in our room, watch and download election news coverage, and just chill. We scored some WiFi by positioning our laptop right up against the window – screw the hotel Internet! We showed ‘em, hah! Ahem… also Karthik found out that the China Travel Service had no clue on how to get a VISA to Vietnam and none of the other agencies spoke any English. Useless! However, we found some website that offer an online VISA pre-approval and all we’d need is a passport photo on arrival and fill out a form. Wicked! Let’s hope it works out!

In the meantime, we had some delicious, cool, and ready-to-eat ‘cups’ made by Maggi that Karthik found at the supermarket – just add boiling water and voila! – mashed potatoes as well as pasta. And yes, we ordered more KFC! And stomachs full, we thought we’re in Macau so why not do a bit of that gambling b’ness! So we went down to the Rio Hotel casino and came upon a fairly low-key, small, ghetto casino. Having seen the grandeur and excitement of Vegas before, this was definitely understated and that’s an understatement! A bunch of Chinese folks playing away at Baccarat and Sic Bo (some strange Chinese game) and some cheap slot machines tucked away in the back. Glamourous this place was not! But we knew only how to play Blackjack, so we cashed in some complementary coupons the hotel gave us and tried our luck for a while. We were a bit disappointed there was no Pai Gow Poker – our favourite game and ironic that a Chinese casino didn’t have this most ‘Chinese’ of poker games!

Eventually, our luck ran out at the Blackjack table so we had a whack at the slots. The Fortune King slot machine smiled upon us after a few tokens and we were thrilled. Lots of cool ‘free game’ features and creative sounds and slot symbols! Taking our spoils, we went back up to our room satisfied.

We woke up late, having stayed up playing at the casino. But that’s expected! We fondly remembered the late nights spent at the Flamingo with Nik while we were briefly in Vegas. Still, Macau wasn’t all that we’d thought it’d be. There’s just nothing like Vegas anywhere! Still, we didn’t want to be limited to our hotel/casino so we headed off to explore some others. We walked around noticing that Macau was a bit more run-down than Hong Kong in infrastructure and not as vast, gleaming, and busy. We were walking in the direction of the Grand Lisboa, which was this massive lotus-shaped hotel on top of a ‘sphere’ that had an animated facade and contained the casino. It was an impressive structure! We went in, hoping for some magical experience inside. Granted it was a large casino split over three floors, however none of the staff were helpful or spoke English. Also, it somehow just seemed rather stale, so we left quickly for the Wynn.

One of our favourite (eye-candy) casinos in Vegas is the Wynn, built by the developer Steve Wynn. Rolling in dough, he’s opened another one here in Macau so we thought we’d have to check it out. It was a short walk from the Lisboa and the structure itself was a lot smaller than its Vegas counterpart. Inside, it was ‘pretty’ and quite well appointed as is expected from a Wynn joint, however just wasn’t as impressive. We just think it’s the combination of there being no central strip as in Vegas and the relative lack of competition between casinos since we figure most Chinese gamblers aren’t wooed as much by ‘bling-bling.’ We just hung out at the Wynn and played our Fortune King slot game for a while and jetted off back to our hotel. On the way, we walked past some cool casinos like the Star World Resort, but didn’t really grab us in any way.

Once back at the Rio, we went to the main floor and awaited the daily draw. The hotel has a draw every day for prizes such as free rooms, dinners, and a grand prize of HKD $10000 (about CDN $2000) in non-negotiable chips. We had four tickets we entered; one for every night we’re staying at the hotel. As the draw began, we had one of the casino managers stand beside us translating the numbers being drawn and what the prizes being given away were. So a few people seemed to be winning all the prizes since they had whole ‘booklets’ of the tickets, which we learnt they bought from huge winnings at the casino. Fair, eh!? Have more, so win more! Then came some exciting news! We actually won something! But, here was the kicker. We learnt we won a HKD $3000 (around CDN $ 600) cash prize – coupons towards the specialty seafood restaurant at the casino. What the…? What do we do with this?

We actually went to the restaurant to have a look at their menu. There we found page upon page of crazy, exotic cuisine our stomachs (and palate) would rebel against! Abalone. Squid. Bird’s nest. Shark’s Fin. We thought, “C’mon!” Disappointed, we walked to the Customer Service to speak to a manager. The same lady who helped us translate the draw numbers greeted us and heard us out. But she was at a loss for what to do, since they couldn’t really give us chips or money in return. We just said they could keep it and figure out what to do for us. We walked back to our Blackjack table (the only one at the casino) and played for a while. Not really winning big, we called it a night.

So Macau apparently has some culture worth exploring and not just a big casino heap. The guidebook we had mentioned all these temples, markets, squares, churches (due to its Portuguese heritage) and were all worth a look at. But we were pretty ‘sightseeing’-outted by now and were mostly here for the gambling and being chill. Still, we took a cab to the Senado Square – the main square in Macau – to check it out and also to ship some goodies collected since Bali. The main Post Office also happened to be at the Square. So having done that, we quickly grabbed some McDee’s and then wandered about. Lots of tourists were around and the square itself was lively, but not splendid or memorable in any way. We walked out of the Square and on to some local market streets. We even checked out a crowded store selling all sorts of toiletries on sale, but then it got too claustrophobic to remain there.

We were now thinking of heading back, but taking a cab proved to be more difficult than imagined. So we just kept walking back and eventually figured we weren’t too far from the hotel. We passed by the supermarket and bought some more ready-to-eat cups. Back at the hotel, we just chilled for a while and freshened up before heading out again to check out the Venetian. This casino was supposedly the largest in the world and was located on Taipa, an island off mainland Macau. Taipa is increasingly becoming more developed and aims to rival the strip in Las Vegas. While still early in its aspirations, the Venetian is sure to be the main attraction here for a long time. We took a cab there and as we pulled into the casino, we could see just how massive this place was.

The entrance was entirely like the Venetian in Vegas and appointed luxuriously with classical and Greco-roman decor – really classy and sophisticated. At the casino, we were just totally stunned by the sheer size of the casino floor. It was probably as big as around 4 football fields. We wandered around and played some Blackjack, which drained our reserves fairly quick. We then went up to the shopping mall level and came up an opening – a Square – where Venice was recreated right before us and right inside the casino. Faux sky and canals complete with Gondolas and piers with boatmen waiting for passengers! A massive number of shops everywhere and we quickly became tired just wandering about. The scale of the mall was also unbelievable and the presence of the canals was just the icing on the cake. It was quite the eye candy! We knew we couldn’t do much else, so we left and took the free shuttle the hotel offers back to Macau. We took the one for the Sands casino which was quite close to our hotel.

Another ‘blah’ experience – big casino, lots of gamblers, yada yada. We were just glad to be back at our ‘modest’ casino in our hotel. Having ‘freed’ up our baggage going onwards, we didn’t have to do much packing. So we just hit the Blackjack table and enjoyed the times we were up and well, endured the times we were down eagerly waiting to be back up again. One of the dealers, Joe, was especially funny and candid in his manner, which we liked. It was a chill experience and we weren’t too concerned if we’d recover our losses or make the big-time. It was just an experience, and was Macau. It’s time to get ready and head off over to Ho Chi Minh City (Saigon) in Vietnam. We have our pre-approved VISA letter and hope all goes well!