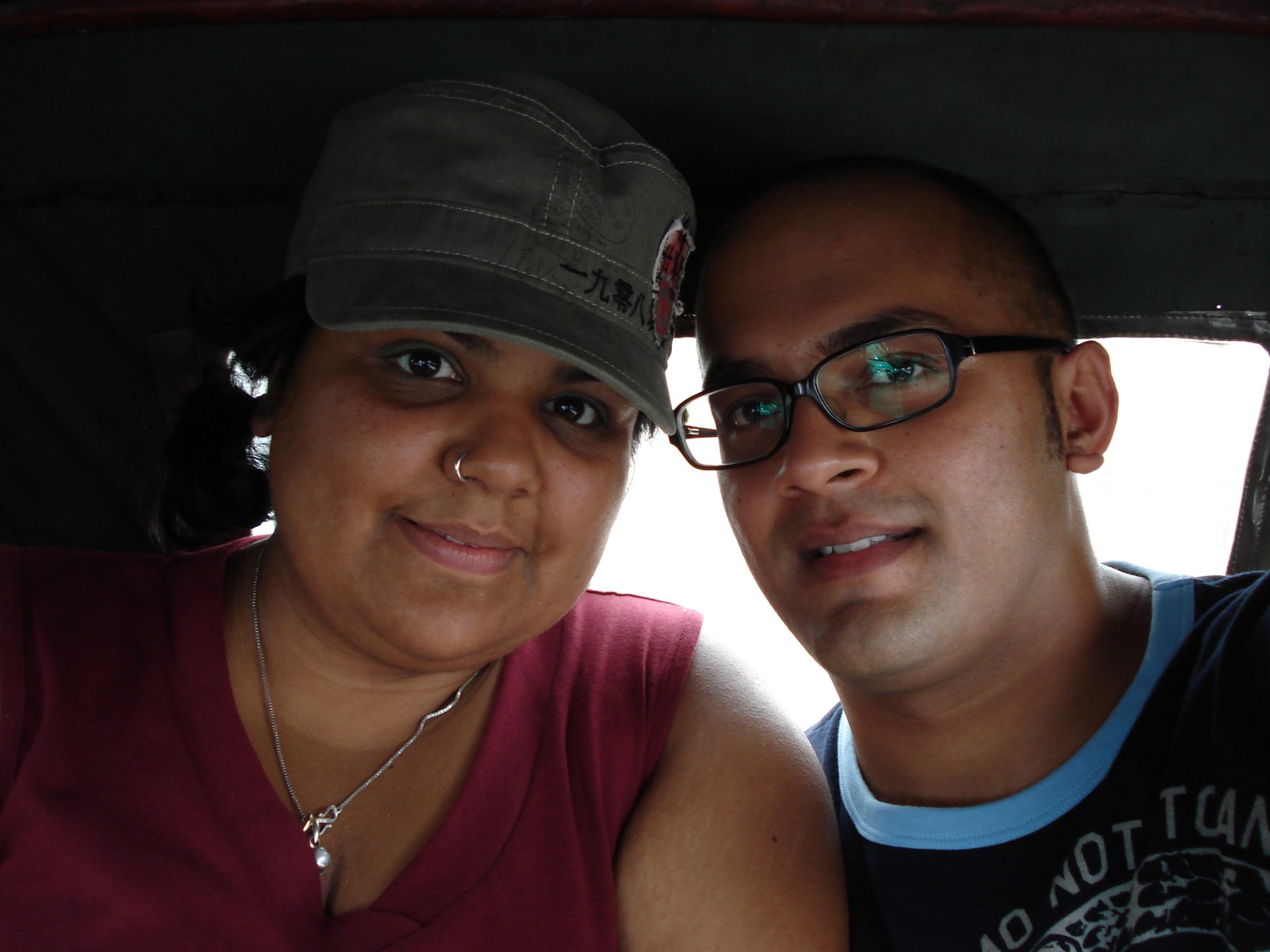 We landed in Jakarta yesterday afternoon and were completely out of it. Really out of it. Stood in a long line to get our 30 day visitor visa – people don’t respect personal space here – they like to come up right behind you. Penny was quite irritated. Then another long line-up for the customs/immigration check. We were glad that we were sure that we didn’t have the coca candy from Peru, because the penalty for any type of drug trafficking was death! We found out from the immigration officer that the 30 day visa cannot be renewed here in Indonesia. To renew it, we have to physically leave the country and re-enter to get another 30-day visa. We had no idea! We read online that we could have renewed it here. But we were too tired to think about this. After collecting our baggage, and heading outside, we bargained with the taxi driver, and got dropped off at our hotel.

We tried to stay awake so that we could get over our jet-lag, but just couldn’t. We fell asleep early and boy were we glad that it was a really nice hotel.

Today we woke up early and watched TV. In the afternoon, being famished, we headed to one of the malls here, Senayan City. The concierge recommended we go there for the variety of food options we were seeking. We walked around the entire food court, and decided on some local dishes. Man – super spicey, and our mouths were delighted! The mall itself was quiet impressive. With stores like Banana Republic, Marks & Spencer, Top Shop, Fossil, Prada, Gucci, and the like, this 6 storey mall was blingin’! It even had some Art Galleries, and a fancy grocery store (which we were happy to visit to buy the essentials – water, pop, beer, bread, cheese). We hung around for a while, enjoyed some crepes for desert, and fresh sugar cane juice.

Then while looking for an ATM machine, we stumbled upon a store that got Penny all excited – The Brow Haus. This salon specialized in doing eyebrows. They called themselves the architects, and had the schematics of different types of faces and how they determine the brow shape that compliments each face! At $10, the experience and the product was a bargain!! Tired, we stood in line for the Blue Bird taxi, and were happy to reach the hotel.

Yesterday we stayed in and did nothing all day. We needed to rest. Especially since we hadn’t gotten any sleep in Vegas, and the long flight from LA still had us exhausted. Today, we headed out to check out the city and the its highlights. First stop, the National Monument. A tower with an observatory at the top, symbolizing Indonesian independence. It took us quite a while to walk the grounds looking for the entrance to the actual monument. Finally, we got there, and noticed the beautiful 3D murals on the wall around the monument depicting the history of Indonesia. We walked around the entire perimeter and then headed up to the observatory. We could see the entire city from there. It was nice. We got back down and headed off to our next destination – the Batavia Cafe.

The Batavia Cafe was the oldest functioning cafe/restaurant (over 100 years old from what we remember). We decided to grab lunch here. It was pretty – colonial style and covered with pictures of all the celebrities that have visited here. Right across was the Jakarta History museum – apparently a must see. So we checked it out, and came out thoroughly disappointed. But considering it was only $2 to get in, we weren’t pissed. Happy to be out of there, Karthik decided that it would be a good idea to go check out the port. So we hunted down a Becak, a 3 wheeler, and asked the driver to take us to the port.

The ride was bumpy and when we got there, we were happy that we didn’t actually get out and let the Becak go. The place was simply a port – with nothing else to see. The boats and ships were docked, the place smelt nasty, and there was no place to walk or sit. So we asked the Becak to go back, and we realized we had had enough of sight seeing. We found a cab and headed back to the hotel (where it was clean and cool!). On our way we stopped off at another mall to buy a GSM phone chip. $2! Imagine! This mall wasn’t high end, and so had all sorts of stalls selling bootleg CDs and DVDs, snacks, hair things, shoes, and bags. It was fun seeing this type of a mall, instead of the high-end snooty mall with the big brand names. We picked up some boiled corn kernels in a cup, to have later (Karthik’s cup had a fly half way down – what a discovery!)

We headed off to pick up our train tickets to Yogyakarta yesterday. The line up was huge, and the window didn’t open for another hour. So we asked a police officer where we could buy our tickets. He directed us to the Customer service office, where we were brought our tickets! We headed to the Senayan City to meet Widiya. Widiya and Karthik are school friends from Montreal. Widiya moved back to Indonesia after high school, so Karthik was quite excited to meet his good friend after many years!

We decided to wait for him at a cafe, Secret Recipe. The glass door that lead to the patio was so clean, that Penny bumped into it, hard, and the bump made quite the sound. While we waited, 2 other people bumped into that door! Finally, Widiya came and we had a real wonderful time just sitting and chatting while the coffees kept coming. We really wanted to meet his wife Rosi, but she wasn’t feeling well. It was awesome to meet such an old friend – we shared our stories, the guys realized how they both shared similar experiences in life even after parting ways.

We talked about the possibility of them moving to Canada, especially since he mentioned his frustration with the Indonesian system and the way people are here. He was especially feeling this way as he was soon to be a father, and concerned about bringing his child up in this country. So we really hope something works out. A truly great time!! We can’t wait to do it again – soon, hopefully, and with Rosi! We picked up dinner and headed back to the hotel, really happy to have seen Widiya and have spent time with him. It’s crazy how sometimes you can find yourself on the same wavelength with a person living across the world, and not feel that way about people who live in the same city as you. It’s also sad that when this happens, and you can’t spend more time with that person.

Today we stayed in again and went to bed early, to wake up early to catch our train to Yogyakarta.