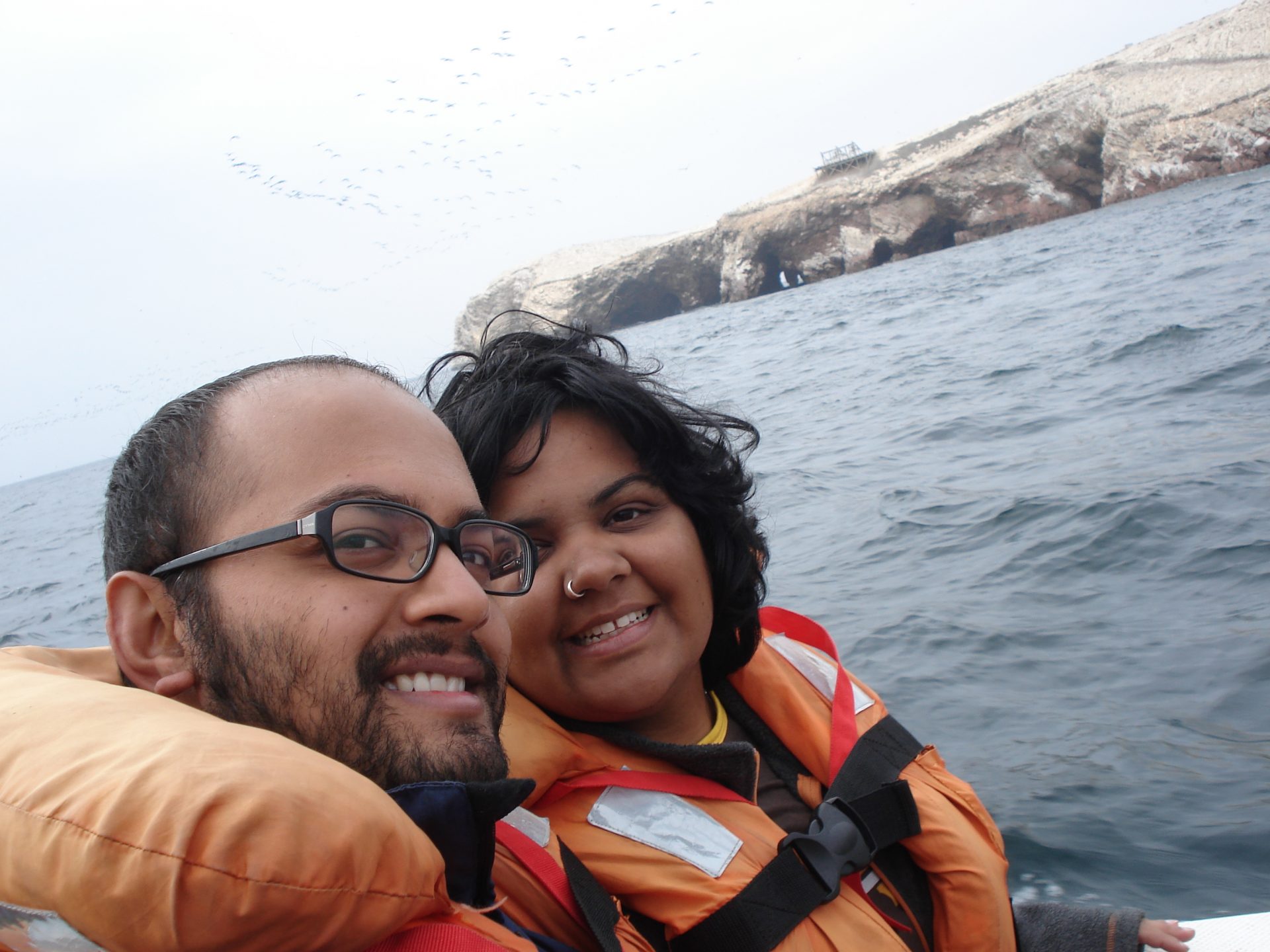 We got to Lima last night, and spent 2 hours looking for a hotel with an available room for one night. Imagine!! High tourist season! Finally found a place within our budget, and after looking at the bathroom, decided that we would skip showering there the next morning! We dropped our luggage and headed out to get some food. We had noticed some Indian restaurant names in a little guide at the front desk, but since it didn’t have the address, we decided to ask around. We asked a police officer if he knew of any Indian restaurants nearby. He didn’t, so he waved another officer over to ask. Even he didn’t know. Another one came. Two of them were calling around to find out when finally one had the answer! He hailed a taxi and told the driver to take us to a particular address. We got there, but it was an Italian, not an Indian restaurant. Disappointed, we stopped off at another nice place, and decided to eat well. The food was great! The live entertainment a bit loud for our taste. But satisfied, we headed back to the hotel. We wanted to make arrangements for a car rental for tomorrow, but all the car rental companies were ‘out of stock’! Again – imagine!! High tourist season!!

Today, Karthik worked his magic and found us an economy car for 4 days at the nearby Budget. After tonnes of paperwork, and signing off on a $590 deductible for insurance, we got the keys to our Fiat – manual drive, manual windows/door, no power steering wheel, but had a pioneer stereo that played MP3s! Wicked!! So it was decided that Penny would be driving, as Karthik doesn’t know how to drive stick. Oh it was such a thrill to even get out of the side street, and navigate ourselves to our first, and most important destination – Starbucks! We spotted it last night, and knew exactly what we wanted to order this morning.

So after a thrilling ride up the main street of Miraflores (the tourist neighbourhood of Lima), we headed to the coffee heaven! Ventis! It had to be the Ventis. Grandes would just not be good enough. So we grabbed our coffees, and found a place to buy a blank CD to burn our MP3s for our Road Trip.

And then, we were off to find the PanAmerican Highway South, that would take us to Paracas. The drive to the highway was crazy! Being forced to weave through traffic, and maneuvering this car with no power steering wheel was something to get used to! Finally we got on the highway, and discovered that the right lane is reserved for local mini buses that make sudden and frequent stops on the highway side to drop off and pick up passengers. So the only safe place to drive was the left lane, and to be there, we had to drive fast!! Booyakasha!! It got better as we left the city. By now the CD was also burnt on the laptop. We were grooving!

The view along the highway was incredible! The pacific ocean on the right, and Desert on the left. The different coloured rocky hills were a sight against the water. We were so happy. Being in a car alone also had something to do with the good time we were having. We could stop anywhere to take pictures. We could listen to our own music. We could go at our own speed. It was good. Freedom is good. We were passing through one of the villages along the highway and saw stalls of fresh fruit on the side. So we stopped off and bought us a bag full of fruit (for only $2)! We were loving the stunning views. The traffic was decent. The roads were smooth. The drive was just so much fun!

Four hours later we were in Paracas. We stopped off at a tour agency that was right at the entrance of this small little town, and the guy took us to a quaint little hotel that was still partly under construction. If anything we have learnt so far is that new hotels are a wicked place to stay at – they are super clean and the prices are reasonable. Actually most of the buildings (houses/hotels) there were being renovated, restored or being built because just last year they suffered from a huge earthquake which destroyed most of the properties. The hotel was quiet and clean and cheap. We loved it! We booked our tour of the Islas Ballestas (islands) with the guy for tomorrow morning at 8 am.

We had breakfast in bed (included in the rate), and headed off in the tour van to the port for our tour. This tour was the only reason for our stopover in Paracas. The British girls we had met in Puno had told us about it.

These islands of the coast of Paracas were know as the “Poor man’s Galapagos” islands. We got on the speed boat along with thirteen other tourists, and were on our way. The boat stopped a couple of minutes later and we got to see a school of dolphins up close! Such gentle and elegant creatures! But because they swim quite fast, it was hard to catch them on the camera.

The boat started again, and stopped near the edge of a peninsula – a rocky hill, with a huge candelabra carved on its side. We then headed further into the ocean. The guide warned us that the ride would be bumpy, and it surely was! Quite bumpy! That was exciting! But what was more exciting was what we saw next…Penguins!!! Tiny little penguins, hopping about, scurrying away from the cold waves of the Pacific. They were so damn cute. They were all hanging at one side of the hilly, rocky island. The island itself was quite beautiful – with interesting shaped hills and tunnels – all natural. Then the boat drove off further and there were sea lions, just chilling, lying around. These islands were covered with birds of different sorts. In fact, there are so many birds around these islands that their poop (Guano) is a big source of income for the locals. It is exported throughout the world for fertilizer! It was a short tour, and we were soon heading back. We stopped again to see more dolphins playing around. Though we were sad to have the tour be over, we were still happy about being able to see penguins and sea lions and dolphins!! What a treat!! Totally worth the drive to Paracas.

We got back to the hotel, and got ready to head out to Nazca.