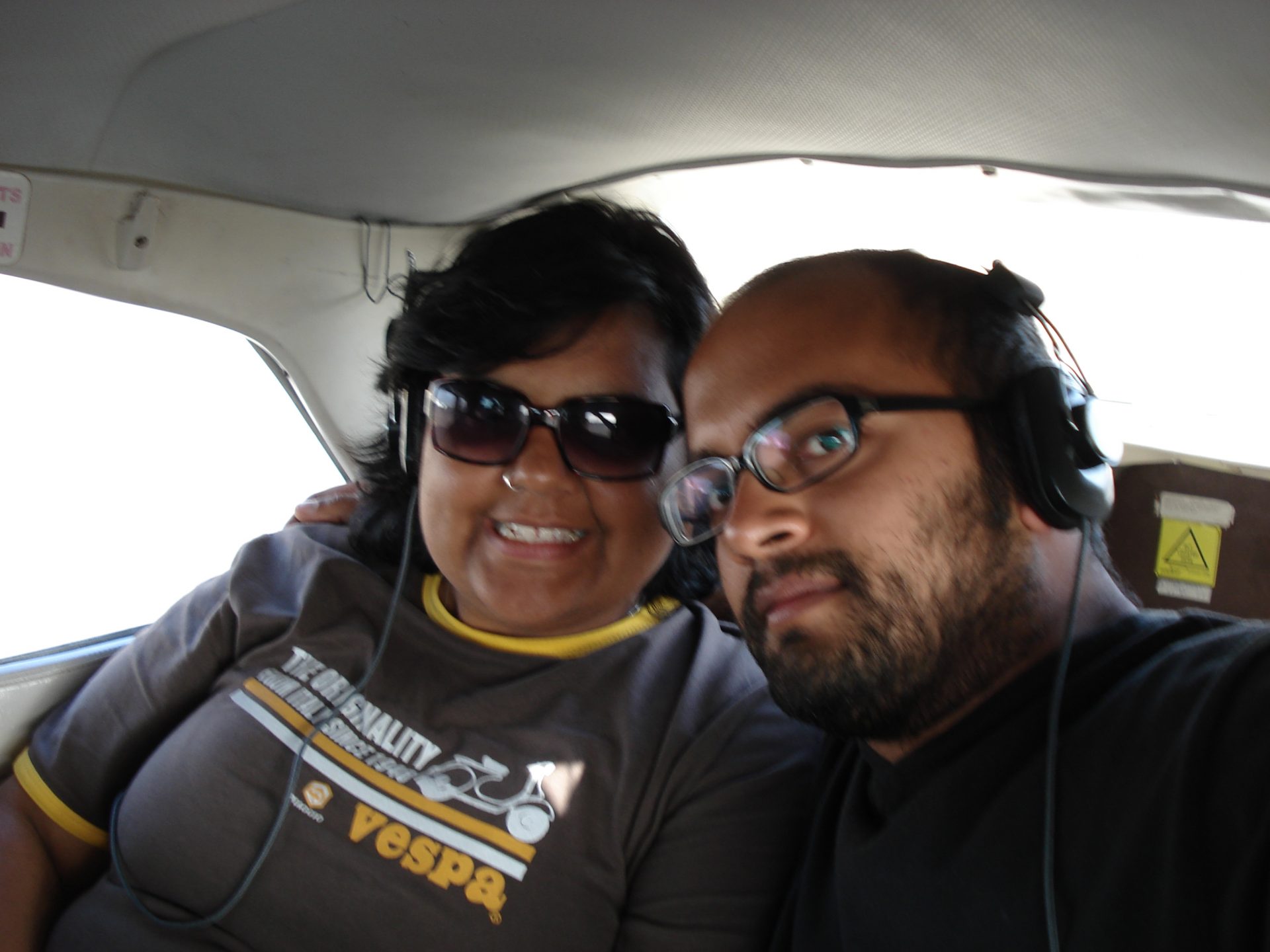 The drive was beautiful along this stretch as well. We went up some crazy rocky mountainous roads. And then came back down. There was a little village in the Oasis. It was beautiful to see such greenery amidst the desert hills. Just beautiful. Penny especially enjoyed the adventurous driving, while Karthik got to enjoy the spectacular views. We passed Ica, we planned to stop there on our way back (to break up the drive). We got to Nazca, and were thrilled to see the signs on the side of the highway that said “Nazca Lines”! We were here!!! The crazy lines etched on the surface of the earth way back when, only to be seen from the sky. There was a watch tower on the side of the highway were some cars had stopped and people were walking up. We also stopped to check out what was going on. Apparently we could see two of the several glyphs from atop this tower. So we paid the fee of 1 Soles each and walked up. And yes – we saw the hands, and the tree! The guide selling a book on Nazca lines told us that the Nazca people etched these about 2,000 B.C. We asked him if Aliens had anything to do with it. He responded very matter of factly – yeah it is believed that the Nazca people were in touch with some Aliens. Happy to hear his response, we hopped back on the highway to Nazca.

We were told to buy the tickets for our flight over the Nazca Lines in advance, to avoid delays. So we headed straight to the airport. The airport building was a little hall, and along the sides were tour/flight operator kiosks. We started at the most popular one, which was fully booked for tomorrow. The next one, also booked. The third had availability, and we were in the process of booking it when the agent asked if we wanted to go on today, in 20 minutes. Not being mentally prepared for it, we hesitated. But then she said that it’d be better today, since the weather was good, and that we don’t know what the weather would be like tomorrow. It made sense to us, so we agreed. The problem was that we didn’t have enough cash to give them, and if we made the payment by visa they would charge us 10% fee on top of the fare. She told us that that’s not a problem, and that she would go with us to town after the flight so that we can pay her the balance.

We were still in the process of figuring this all out while she did the paperwork, when another agent came and told us that we should go with him. The two agents shared some dialogue, the lady got upset, told us that today won’t work, we can only go tomorrow, and the other guy told us that we’re going with him today and that he already has our paperwork done, and that we have to leave now, and that we should hurry, and that he would pay for our airport tax and that the weather is better now, and that the pilot is waiting, and that the other travel agency is no good, and that we will be better off going with their larger plane, and that we have to hurry. We were so damned confused. We had no idea what was going on. Before we knew it we were walking on the tarmac, not knowing what’s happening with which agency, but knew that we’re going, and we’re going now! So mentally prepared or not, we were going to see the Nazca lines! Strapped in, headphones on, cameras ready, the plane took off. There were in total six of us on that plane (full capacity).

The pilot, who looked seasoned enough, and 5 passengers. We looked down at the barren land, the arid plateau, and all we could see were lines, all over the place! Then we heard the pilot through the headphones, he tilted the plane and pointed to the right to the first glyph – the whale! After a few seconds of trying to locate it – it was right there. Oh my God. These are real! Then the dog, then the monkey, then the astronaut, then the spider, the condor, humming bird, crane, hands, tree, parrot, and trapezoids. Wicked!! Just Wicked!! These and the countless number of absolutely straight lines all over the flat land totally looked like paths or directions or something to do with Space or Aliens or travel between planets/stars or something other than something to do only with Earth! Incredible. We landed safely, took care of the crazy tour agency politics, found a hotel, and checked in. Nothing else to do in this small town, we stayed in and watched lots of shows on our laptop. Side note – our room service dinner was a little troubling – the chicken was totally, completely uncooked beneath the surface! Good thing we didn’t simply bite into it!