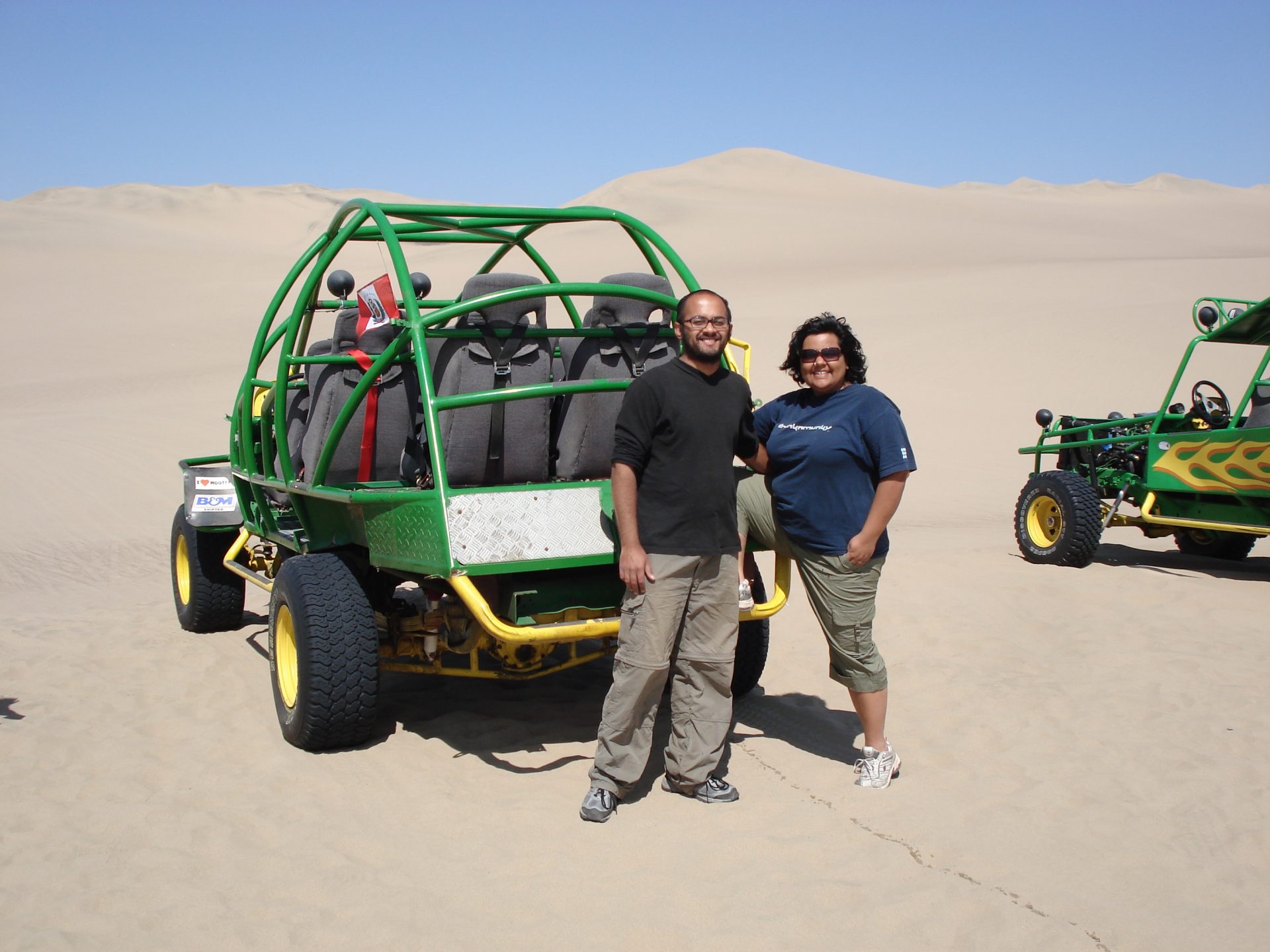 We took it easy today – with no early starts, but early enough to catch our free breakfast! We are headed to Ica today, to check out the Dunes there. A beautiful drive back the way we came. We found out about a nice hotel right across from the dunes in the Oasis called Huacachina. Going through the small streets of Ica, we thought we were headed in the right direction, even when the road ended and the path turned into desert. We soon discovered we were headed in the wrong direction. Finally we got to Huacachina, and the hotel was hard to miss. We dumped our stuff in the hotel and went out for a walk since it was still early. We booked our tour for the next morning, and decided to just hang out by the pond. We got tired of just sitting there, so decided to walk around. After two circles around the same area (since there was nothing else there and no other place to walk), we headed back to the hotel for some more show watching! Room service again – and the food was decent.

This morning, not knowing what to expect, we headed off to meet our tour operator. Since he couldn’t find other passengers, we were going to be driven in a smaller buggy.

A little disappointed, we were soon pawned off to another operator with a bigger buggy, and room for two. Happy now, the tour started. This “buggy” was no ordinary buggy! The vehicle had massive tires, was made of solid iron pipes, and the engine sounded hella powerful! The driver revved the engine, and we were on the dune, going up. We went up the dune, then we went down, then up another, then down, then up a larger dune, then down it – full throttle, hella exciting! Actually, exciting is not the right word for it – it was absolutely exhilarating!! Then we went up this massive dune and the driver paused right at the peak…we looked down and it was a steep hill. Before we knew it, he revved up the engine again and down we went!

OH MY GOD!! THAT WAS WICKED! We did this a few times, and each time our hands clenched the handle bars in front of us, and our hearts raced, and our eyes widened, and our mouths screamed “OH MY GOD!” So thrilling! We didn’t know what we were in for…and man were we in for a sweet ride!! These drivers know the area and the dunes like the back of their hands… and it showed. The confidence that the driver was driving with, at reckless speeds, and at such great heights! Wow!! We finally stopped on top of a dune, and he told us to get off. He took out snow boards, and told us that we could board down the side of the dune. We had the option of either doing it standing up or laying flat on the board. We chose the latter option – as it was easier. Karthik went first! It was awesome! Just frikking awesome!!

Penny confirmed with Karthik that she can do it…and Karthik screamed from the bottom of the hill…”do it…just keep your elbows in and just do it..it’s awesome!” Down she went…screaming! And as soon as she got to the bottom – we gave each other a big high five! This was fantastic! What a thrill. Walking back uphill was another story. It was tough going up the sand dune. But finally there, Karthik went again, this time on his feet!! We then drove off to another spot, up and down other dunes, screaming and excited! This dune was steeper. And Karthik went sand boarding again! Since we were short of snow/sand boards, Penny had to wait till the next dune. The next dune was steeper, and longer. It was amazing. We both went on it this time, and man – we were so bloody happy!! That was the end of the sand boarding, now just the rest of the thrilling rides. Finally we were back at the base and man – it was the best tour throughout our travels thus far! The best $15 we have ever spent! Completely exuberant, and full of sand, we got back to the hotel room for some much needed showers. Packed up, checked out, and on the road, back to Lima.